Since I’ve been self-quarantining for weeks due to Covid-19 I thought I might try to complete some of my blogs from my 2019 Mideast and Asian tour that I failed to write while traveling.  This is the first of two blogs on Jordon – one of my favorite Middle Eastern Countries…

Jordon is a relatively new country that was only formed in 1921 when Winston Churchill serving as British Secretary of State for Colonies found a box of crayons and in a drunken stupor redrew the lines of the entire Middle East totally ignoring ethnic lines and historic alignments.  And 98 years later the entire area is still living with the consequences of British hubris.

Once the new boundaries were established Hussein bin Ali, the Sharif of Mecca and a direct descendant of the Prophet Muhammad set up his sons as kings of Iraq and Jordon.  So, the son, Abkullah led his caravan of horses, camels and goats into the poor and tiny village of Amman and declared himself king and Amman the capital of a big ass desert and a population of Bedouin nomad herders. Great Briton supported Abdullah’s claim as king and the rest is history. 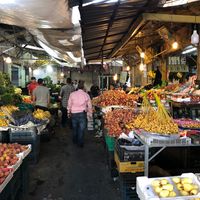 Fruit and Vegetable Shopping in the Amman Souk

Sheep Head – Not just for breakfast any more.

On my first afternoon and evening in Amman I wandered through the Souk el-Khondra vegetable market which just happened to be a few blocks from my hotel.  Like souks all over Asia and the Middle East this one was overflowing with fresh vegetables, fruits, nuts, spices, freshly butchered meats of all kinds, live birds, both new and used clothes, piles of used shoes to dig through to find mates, old electronics and junk of every type being sold as precious antiques lol. 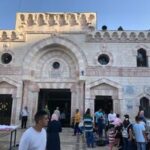 Along my route through the souks I came across the Grand Husseini Mosque and the Roman Nymphaeum (ruins of a Roman two story fountain).  The Grand Husseini Mosque built in 1934 is the main mosque for the downtown area and sports a beautiful façade.  Unfortunately, the mosque is not open to non-Muslims so I could only admire the architecture and people watch from outside in the busy square.  Photos of the souks and the Mosque are attached. 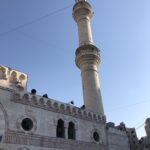 The Nymphaeum was built by the Roman’s in 191 A D and is a large two story public fountain with mosaics, stone statuaries, swimming pool and multiple fountains dedicated to nymphs.  Excavation began only a couple of decades ago so all that is visible right now are some columns an archway and a few alcoves.  The rest of the Nymphaeum is still buried under all the rubble of nearly 2000 years.

The Roman Emperor Pompey conquered Jordon, Syria and Palestine in 63 BCE and controlled the area for four centuries.  The formerly Greek cities of Philadelphia (Amman), Gerasa (Jerash), Gadara (Umm Qais), Pella and Arvila (Irbid) formed the Decapolis League bonded by culture and economic ties.  Philadelphia (Amman) was a large Greek and Roman city but over the next 2000 years became lost in time and by the early 20th century all that remained of its glory days were Roman ruins and a small Bedouin village. 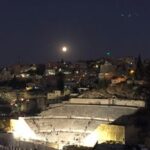 My hotel had a very nice rooftop restaurant offering a fantastic view of the Roman theater below in one direction and the Amman Citadel high above in the opposite direction.  The food was only mediocre but the views and beer were fantastic! (photos from the roof attached) 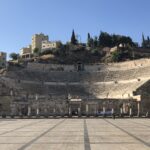 Roman Theater in the daylight

Next morning, I began my tour visiting first the very well preserved 6.000 seat second century Roman amphitheater that I had photographed the night before from the rooftop of my hotel.  The north facing amphitheater commissioned by Emperor Antoninus Pius was built so the spectators could watch plays without the sun in their faces. Amazingly, the acoustics are so good in the structure that from a point in the center of the stage you can hear a conversation all the way in the cheap seats.  As you can see from the photos I made a few new friends while roaming around the theater.

After my tour of the theater I visited the small Folk-life museum next door focusing on the lives of local Bedouin tribes through the centuries.  The exhibits included examples of traditional clothing of both men and women, jewelry, woven baskets, cooking utensils and weapons.  After the visit, I grabbed a quick lunch and rented a car and driver to take me up to the Amman Citadel. 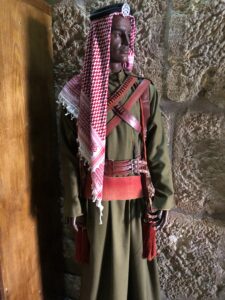 Uniform of the Bedouin Desert Patrol 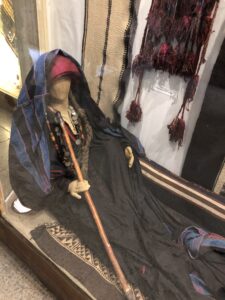 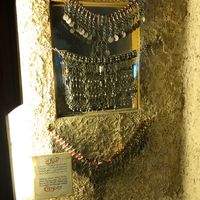 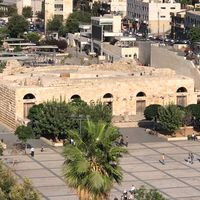 The Amman Citadel was originally built during the Bronze Age in 1800 BCE and further fortified and repurposed during the Iron Age and by the Romans, Byzantine and Umayyads.  The most interesting things left to see are the ruins of the Roman’s Temple of Hercules, the Umayyad Palace, a Byzantine Church, and the Jordon Archaeological Museum. 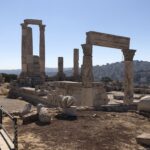 All that is left of the Temple of Hercules – a few columns and one big hand.

All that is left of the Temple of Hercules is a couple of huge pillars and a giant hand the is believed to belong to a statue of Hercules.  The buildings that comprised the Umayyad Palace is the best-preserved structures in the Citadel.  Built in the 7th and 8th century the compound once covered many acres and consisted of a number-of- structures but most were destroyed by an earthquake.  Fortunately, the grand domed audience hall of the Palace is still standing and in good condition. 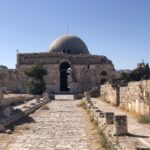 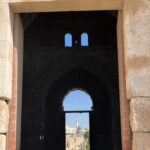 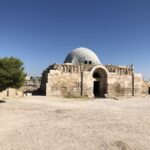 All that remains of the 6th century Byzantine Church is the footprint of the Basilical style plan consisting of a central nave side aisles and a semi-circular apse.  Within the footprint are a series of columns with Corinthian capitals scavenged from the Roman Temple of Hercules, and the remains of the first couple of feet of the outer walls. 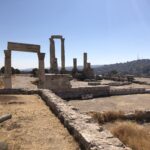 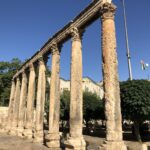 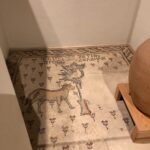 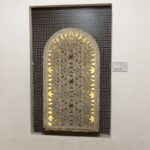 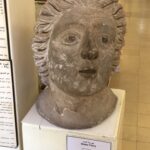 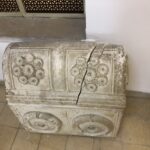 After touring the Citadel, I drove north to within a few miles of the Syrian border to visit the Jerash Archaeological Site.  Jerash, an old Roman City, is Jordon’s second most visited destination ranking only behind Petra.  The Greek city was conquered by Pompeus in in 63 BC and became one of the League of Ten Cities of the Roman Empire and remains today as one of the best preserved Roman archaeological sites in the world.

It is incredible to believe that this massive complex of giant columns, paved roads, theaters, baths, temples, hippodrome, gates and cardo all remained hidden under 2000 years by sand and neglect. The South Gate and City Wall of ancient Jarash

The best preserved and most interesting of the ancient ruins begins with Hadrian’s Arch, the entrance to the old city built to honor Emperor Hadrian’s visit in 129 AC.  The 15,000 seat Arena that hosted gladiator fights and other sporting events.  The very interesting and perfectly preserved Oval Square surrounded by Ionian Columns with two alters and a fountain in the center. The Thistle or Cardo Maximum, a paved and column lined road that ran the length of the city.  The Nymphaeum, a fountain dedicated to the nymphs with its marble and half-dome and lion’s head water spout.  The Temples of Zeuz, Artemis, and Dyionisus (repurposed as a Byzantine Church in the 4th century) all lined along the Cardo.  The Hippodrome, Forum, and Baths all nicely preserved.

But the most impressive of the monuments are the North and South Theaters.  The South Theater, is a two-story structure with a beautiful stage, hidden passages, seating for hundreds and excellent acoustics was built in 90 AC.  The North Theater was designed as a square surrounded by columns.  Originally there were stairs leading to the entrance and the theater was used for public meetings, important events, and theatric shows.  Unfortunately, many of the stones for the stairway and the theater were scavenged and used for nearby buildings through the ages. 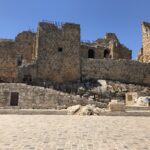 Ajlun Castle built to protect the southern Levant from the Crusaders 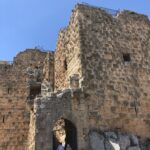 My final stop in northern Jordan was a visit to the 12th century Ajloun Castle.  The Castle was built by the nephew of sultan and military genius Saladin atop Mount ‘Auf and provided defenders incredible views of the Jordon Valley and the surrounding desert.  Much of the castle has been destroyed by subsequent rebuilds, earthquakes and time but many of the chambers, carvings and towers can still be toured.

Photos of all the places I visited in Amman and Northern Jordon are attached.  I will provide a second Jordon blog focusing on Petra and the rest of Jordon south of Amman shortly.