Posted on November 16, 2019 by rockieontheroad

I arrived in Beirut late on the evening of the 1st and caught a taxi to the Alexandre Hotel in an old Christian neighborhood in Northern Beirut and checked in for 2 nights.  Next morning, I set about getting organized.  This was something I had not had to do since early June because I had used guide services thru China, Tibet, Tajikistan, Uzbekistan, and Turkey and they provided door to door transportation as well as expert guides to make sure I understood what I was seeing and to provide local color and commentary. 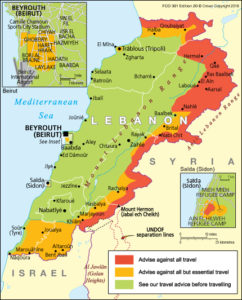 I chose to do Lebanon on my own and had prepared an ambitious schedule of sites and activities.  My travel plan began in Beirut, then on to the ancient Roman city at Baalbek on the Syrian border for a night, then from Baalbek, on to Tripoli’s El Mina district for a night, Next day traveling on to tour Batroun, and Byblos before driving to eastern Beirut and checking into the Assaha Lebanese Traditional Village for two nights.  My final excursion in Lebanon would be south to Tyre and several sites in Siden on the way before making my way back to Beirut.

I had researched and booked all my hotels in advance as well as creating a list of sites to see in each city.  The only thing left open to do once I hit Lebanon was to figure out how I was going to get from place to place.  I began my first day with a taxi to the Greek Orthodox Cathedral of St. George.  Fortunately, most of the sites that interested me were in the immediate area.

So, after spending a lot of time exploring the Cathedral I visited the Al-Omari Grand Mosque, the Cardo Maximus and Decumanus Maximus – the two major colonnaded streets that crossed in what was once Roman Berytus, the Roman Baths and Cisterns, the Cathedral of Saint-Louis des Capuchin, and the Zawiyat Ibn ‘Arraq al-Dimashqi prayer corner ruins.

What I didn’t visit that was on my list was the National Museum, the Archeological Museum, nor the Souks.  I walked all around the area the maps indicated the souks were but all I found were modern stores and no old traditional vendor stalls.

Of all the sites that I visited the most interesting was the Cathedral of Saint George.  The Cathedral was first built in the 14th century and was known as the Saint George Convent.  In the early days, the complex included the seats of the Bishop and priests, a hospital, school, library, and the first Arabic Printing House in Beirut.  The Cathedral is all that survives. 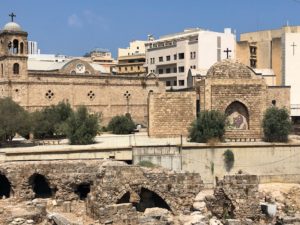 The Cathedral has been damaged or destroyed several times by both earthquakes and civil war.  Each time it has either been rebuilt or restored.  Archeological excavations beneath the Cathedral unearthed the remains of earlier churches, ancient buildings, a corner of the Cardo Maximus and a Medieval Necropolis below its Crypts.

The Cathedral was beautiful but the Crypts and excavations beneath were what held my fascination.  The curators have done an incredible job of excavating the site and posting signs pointing out not only the important periods and ruins (Hellenistic, Roman, Byzantine, Cemetery of the Mamelukes, Medieval, Ottoman) but explaining exactly what I was seeing and how it all fit together in a timeline.  I am including not only several photos from the crypt but also a couple of examples of the narrative provided on large placards that I found helpful in understanding this site’s uses thru the centuries.

The Al-Omari Grand Mosque is both huge and beautifully designed.  The imposing structure overshadows the Cathedral and Roman Ruins which are both next door.  I arrived during the mid-day services so I could only admire the outside of the structure but that was enough for this day. 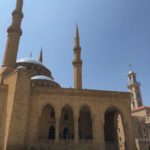 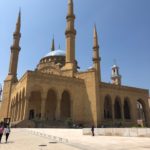 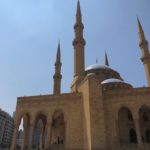 After the mosque, I visited the Old Roman Ruins of the Cardo Maximus.  The Cardo Maximus was the main north-south road of Roman Berytus and 100 meters of the paved Roman Road was once flanked by two rows of limestone pedestals.  These pedestals once supported 20-foot-high columns that held up roofed colonnades on both sides of the street.  The oldest of the colonnades dates back to the 2nd century with a newer one dating to the 4th century.  Many of the columns were later scavenged for use in later structures built over the Roman Street leaving only a small portion visible today. 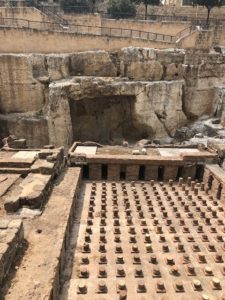 The second set of Roman ruins I visited were the Cisterns and Roman Bathes.  The Romans loved their bathhouses!  During the time the Roman’s controlled the city they built a 10-kilometer aqueduct to supply water to several large cisterns dedicated to filling the needs of four huge public baths.  From the cisterns, a maze of clay and lead pipes and channels directed water to the various pools within the baths.

Roman bathers would go from the first of the baths(warm) to successively hotter pools and rooms until properly cooked and then enjoy a nice hot oil massage.  The water and rooms were heated by huge wood burning boilers that would heat both the water in the pools and air flowing underneath the slate floor of the baths. 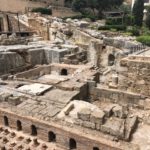 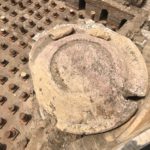 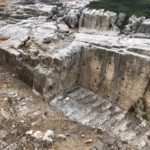 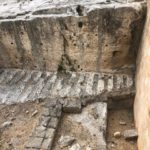 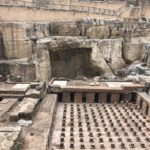 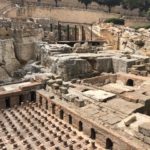 I have also included photographs of the beautiful buildings from the French Colonial period in Beirut.  Walking thru these streets you could very easily think you had been transported across the Med and Alps to a French city.  Also included are photos of a small domed structure that is all that remains of Zawiyat Ibn ‘Arraq al-Dimashqi and the Cathedral of Saint-Louis des Capuchins.

After wearing myself out walking the streets of central Beirut, I caught a taxi back to my hotel.  During the drive, I secured the driver for the 90km drive to Baalbek in the Bekaa Valley (the northern terminus of the East African Rift Valley and Jordon Valley) on the Syrian border the next morning. He was a little surprised that I wanted to even go there telling me the town was a hotbed of Hezbollah activity.  But I assured him I would be fine and we agreed to meet at 8 am the next morning for an early start.

I was in the lobby of the hotel at 8 am as scheduled but there was no sign of my taxi or driver.  I was getting a little concerned by 9 am but shortly after he drove up and apologized that he was late and would not be able to drive me.  His car was overheating and could not make the trip up into the mountains.  However, he had a plan B.  He said there were minibusses that made the trip daily. He offered to drive me to catch the bus, negotiate my fair and instruct the driver where to drop me in Baalbek.

We drove to the on ramp of an interstate and parked.  Concerned I asked what we were doing and believe it or not this was where you caught the bus.  These buses pull up at these ramps ask where you are going and if it is along their route you climb in and off you go.  The 15- passenger minibus I caught was a wreck.  The leather seats were torn and covered in dirt and grime, the exterior was covered in dents and scrapes, and there was no air conditioning. 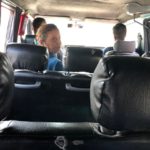 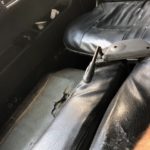 The driver was even a bigger mess.  He looked like he was coming off a three-day bender, had been wearing and sleeping the same clothes for days, and drove with a cigarette in one hand and a cup of coffee in the other.  He seemed to rarely look at the road as he talked to a guy sitting in his passenger seat or intermittingly stuck his head out his window to shout at passing vehicles.  He ran the van flat out with his foot pressed hard on the accelerator.  At one point, we passed a truck full of soldiers and as we passed he was hanging out the window wildly gesturing and screaming what seemed to be a stream of curses at the soldiers sitting in benches in the back of the truck.

Then one of the soldiers recognized him and started shouting and gesturing back.  Turned out the guy was the driver’s brother and they kept this up for mile after mile.  But as crazy as the driver seemed he did get me to my hotel without killing me and an hour quicker than the Rome2Rio site said it would take.

In Baalbek, I quickly checked into my hotel and headed out for a quick lunch on my way to the Roman Ruins on the other end of town – 2kilometers away.  These may be the most complete Roman Temple ruins anywhere.  The highlights are the Baalbek Temple, Great Courtyard, Temple of Jupiter, Temple of Bacchus, and Temple of Venus.  There are other ruins but these four huge temples are the best preserved in the old Roman City.

You enter the Temple Complex up a large set of stone steps, thru an imposing portico of gigantic columns, thru the massive Baalbek Temple then into the Temple of Jupiter’s Hexagonal Courtyard.  Once thru the Courtyard, you find yourself in a semi-circular forecourt which is the entrance hall for the temple of Jupiter. 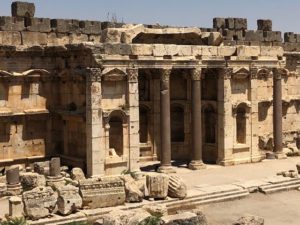 You are now standing at one end of a long rectangular hall which had a row of 12 columns to your left and right.  During the 3rd century, these columns’ capitals, as well as the façade, would have been covered in bronze and gold.  Throughout the photos of the ruins notice intricate carvings of eggs, lion faces, flowers, birds, geometric patterns and human faces.

The most intact building/temple is devoted to Bacchus – God of Wine and good times!  The temple foundation, flooring, columns, and façade are all intact and standing.  In fact, the structure is so sound and beautiful it is used to stage musical performances throughout the summer.  I was fortunate enough to be in Baalbek and to get a ticket to the final performance of the 2019 Summer Baalbek International Music Festival.

In the accompanying photos, you will see the Temple of Bacchus by both daylight and moonlight during a wonderful performance of both traditional Arabic music and jazz performed by Iraqi/Hungarian, Omar Bashir and his band.  The backdrop of the temple’s sandstone walls combined with the acoustics reverberating off the massive columns and walls made for a memorable evening.

Bashir invited performers from previous shows to join him on stage creating an even more complicated and interesting sound and show.  From the rich and soulful lyrics of Lebanese born singer and Oud player Marcel Khalife to the powerful performance of Lebanese singer and poet Jahida Wehbe to the rapid staccato taps of a single flamingo  dancer on the huge stone blocks above, behind, and in front of the band – the night was an absolute magical feast for both the ears and eyes.  Easily my best memory of my time in Lebanon.  And had I listened to the timid wring their hands about Hezbollah, terrorists, and the Syrian border – I would have missed this rich cultural experience.

And my 2km walk back thru town to my hotel in the middle of the night?  Absolutely no problem!  In fact, there must have been 200 of Lebanon’s finest soldiers armed to the teeth all along my route and I could not have felt safer.

Next morning, I hired a taxi to drive me across the country to Tripoli.  Before we left Baalbek, I had him drive me by the old Roman stone quarry to see the megalithic stone of Hajjar al Hibla.  Massive cut stones like the one in my photos were cut from this quarry and transported via complex pulley systems and brute force of 500 men across ancient Baalbek to the site of the Jupiter Temple complex to create the foundation and floor supporting the huge columns and temple façade. 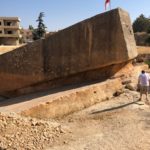 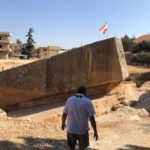 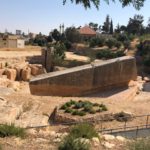 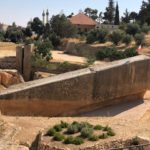 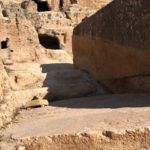 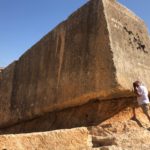 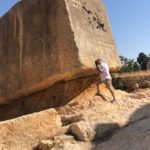 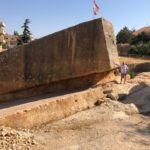 Next stop and next blog… Tripoli